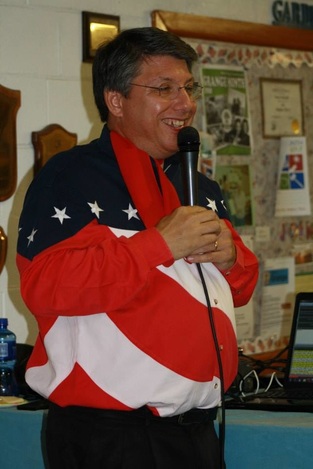 Mike Salerno has been teaching people to dance since age 15. Mike has been a Square Dance Caller since 1975.  He has called for clubs in Kansas, Missouri, and Nebraska. He has been the club caller for the Docey Dandies in Gardner, KS since September 1996. He taught various types of dancing within the square dance activity and continued to add more styles of dancing to his repertoire. With the country craze of the 1990's, Mike’s search for quality information led him to the National Teachers Association for Country Western Dance (NTA) and its Accreditation program. Mike was appointed State Director for Kansas in 1999. He is currently the NTA State Director for Kansas and Oklahoma, as well as the NTA Zone Director for Kansas, Missouri, Arkansas, Oklahoma, and Texas. Mike is an accredited Level III Dance Instructor through the NTA and serves on the NTA Dance Committee. In addition to his training and experience with NTA, Mike teaches and tests through seven levels of the NTA Accreditation program. Mike was the Vice-Chairman of Line and Country Dance for the 57th National Square Dance Convention in Wichita, KS, and the 63rd National Square Dance Convention in Little Rock, AR. Mike also teaches various types of dancing including Line Dancing, Two-Step, Waltz, East Coast Swing, West Coast Swing, Salsa, Cha Cha, Polka, Night Club Sway, Hustle, and other dances for Lawrence Parks and Recreation in Lawrence, KS, and Shawnee County Parks and Recreation in Topeka.